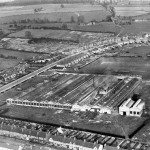 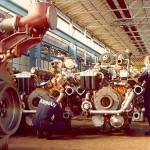 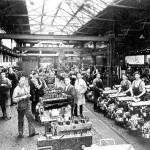 Dorman’s, better known for manufacturing diesel engines, were originally founded to make machinery for the shoe industry, including sole and heel cutting knives. William Henry Dorman, a son of the local Congregational Minister, established his company on Foregate, Stafford in 1869. The firm also made machinery for printing and grinding.

In 1903 they began designing and producing petrol and paraffin fuelled car engines, which then became their main product.

The outbreak of the First World War saw the workforce increase from 500 to 2,000, and the munitions factory in Foregate played an important role in the war effort. Dorman’s also made Simplex narrow gauge locomotives, which carried personnel to the front line, and developed Interrupter Gear which allowed machine guns to fire through a rotating propeller.

Dorman’s made their first diesel engine in 1929; this was to become their main product, and its introduction coincided with the opening of the new factory on Tixall Road. By 1932 the new works included iron and aluminium foundries. By the outbreak of the Second World War all production had moved from Foregate to Tixall Road. The war saw the company employ large numbers of women to replace skilled men who had been called up to serve in the armed forces.

Dorman’s diesel engines were used as power units for a wide range of work: excavators, cranes, dumptrucks, compressors, marine engines and emergency electricity generators. Over 90% of the engines produced annually were exported.

In 1959 the company purchased W.G. Bagnall Ltd, another Stafford-based engineering firm, which specialised in manufacturing locomotive engines. Dorman’s in turn were taken over by English Electric in 1961.