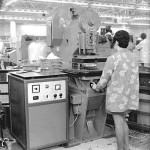 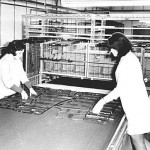 In 1957 the Engineering division of Lotus Ltd was subject to a management buy out, and a new company, Stafford Tool and Die, set up a factory on Rowley Street, Stafford. The company continued to supply the shoe industry, specialising in making machines and tools, including clicking presses, punching and perforating machines and drying machines.

Lotus Ltd continued to be a major customer, but the company also had a thriving trade around Britain, and exporting to Mexico, Canada, Australia and Pakistan. At its height the company employed 99 people.

The decline of the local shoe trade, and the development of the Chinese manufacturing industry in the 1990s and early 2000s meant that the company struggled to compete. By now known as Stafford Tool & Machine, the company closed early 2004.

This entry was posted in Associated industries, Lotus, Stafford. Bookmark the permalink.