History of Shoemaking in Britain – Napoleonic Wars and the Industrial Revolution

The Napoleonic Wars and the Industrial Revolution 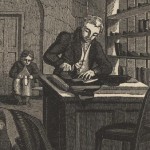 Georgian shoemaker (from 'The Book of English Trades', 1821) 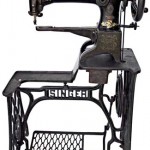 By the mid 18th century shoes were no longer sold only in the shoemakers’ own shops, but could also be bought in many towns from warehouses, which stocked shoes from a range of sources. In towns most shoes were made by outworkers working at home. Manufacturers such as William Horton in Stafford or William Dixon in Stone employed a large number of workers and stored completed boots and shoes in warehouses.

The huge numbers of boots and shoes made to supply the army during the Napoleonic Wars not only saw a great growth in the shoe trade, but also encouraged the development of methods of mass-production. In 1810 M.I. Brunel patented a sole-riveting machine. It faded from view after the end of the war in 1815, but the onset of the Crimean War in 1853 saw Tomas Crick of Leicester patent a riveting method.

Labour troubles continued throughout the later 19th century as the export trade to colonies in Australia and Canada declined, and as the United States began to flood the market with their products. Strikes too place, resisting extended working hours and depressed salaries, culminating in May 1905 with the Raunds army bootmakers marching from Northamptonshire to London in protest against the tendering system which kept their wages low.

This entry was posted in History, Stafford, Stone, Strike. Bookmark the permalink.