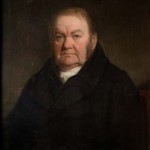 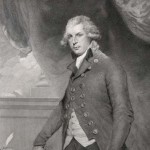 William Horton (1750-1832) was born in Stafford, the son of Walter Horton, a shoemaker. He started his book and shoemaking business in 1767, and is generally regarded as the founder of Stafford’s shoe trade. Before the Napoleonic Wars he had a thriving export trade to North America and the Baltic states, and sold his shoes via agents in London, Manchester and Liverpool.

He built a warehouse on Mill Street at the rear of his home at Chetwynd House. Here workers cut out the leather parts of the shoe. Outworkers would collect these shoe parts, assemble them in their own homes or workshops, and return the completed shoes to the warehouse to be paid and to collect more leather. At its peak, Horton’s business employed over a 1,000 people. By 1813 the shoe trade had slackened off as demand reduced after the Napoleonic Wars, and Horton’s business employed 300 to 400 people.

Horton’s contribution to the Stafford shoe trade’s success was such that his friend Richard Brinsley Sheridan (M.P. for Stafford 1780-1806) proposed a toast at an election dinner in the town: ‘may the manufactures of Stafford be trodden under foot by all the world’.

William Horton was a high profile figure in Stafford’s social and business world. He was Lieutenant Colonel in the local volunteer militia, became Mayor of Stafford in 1804, and issued token coinage under his name between 1798 and 1803.