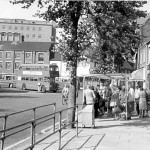 Eastgate Street, Stafford, early 1970s. In the background to the left can be seen the three-storey former shoe warehouse occupied by T.B. Elley until 1921. (Staffordshire Heritage & Arts)

Elley’s of Stafford were one of the largest businesses working in the area’s leather industry in the mid 19th century. In the 1860s they had branches in Stone, Northampton and Kettering. They were involved in a wide range of leather trades, as fellmongers, tanners, curriers, leather merchants and boot and shoe manufacturers.

The business is first recorded in trade directories of 1818, when William Elley is listed as ‘Shoe manufacturer, Foregate’, by which time his business seems to be well established. He had also been a partner to William Horton. By 1834 William was joined by his son, Thomas Benson Elley. They then began to widen their range of activities into leather production and wholesaling.

T.B. Elley appears to have become wealthy very quickly as in 1839 he purchased Eastgate House for £2500. Eastgate House stands on the corner of Eastgate Street and Martin Street and is now the home of the Registry Office. In 1842 he bought John Marsh’s tanyard on Back Walls North (now North Walls). William Elley died in 1848.

The 1851 census shows that T.B. Elley was employing 400 people in Stafford and had recently opened a branch manufactory on Oulton Road in Stone. He was also Mayor of Stafford at this time.

T.B. Elley’s funeral was a major event in Stafford and was reported in the Staffordshire Advertiser on 16th June 1860:
“Stafford, sombre as it usually seems, with the half mourning stripes across its antique gables, appeared more than ordinarily solemn. Most of its shops were closed and the blinds of private residences overlooking the main street were drawn…Many hundreds of spectators filled the streets, who seemed touched by a regretful sadness as they looked upon the long and silent train of mourners.”

The company continued as Elley, Gibson and Woolley. Unusually for a Stafford firm, they produced men’s as well as women’s footwear in their Foregate factory. In 1887, Mary Elley (Thomas Benson’s widow) leased the tannery and fellmongers yard to Samuel Scott. She died soon after in 1890 and left the manufactory and its adjoining residence to her son, also Thomas Benson Elley. The tannery and Eastgate House went to public auction. Elley & Co. continued until 1901, when the firm was taken over by Mason & Marson.

T.B. Elley Junior continued at the old premises on Foregate as a leather merchant, before moving to the old warehouse at 74 Eastgate (Pitcher Bank). He finished trading by 1921.