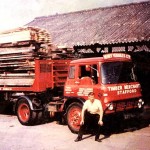 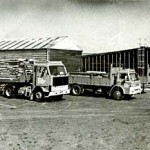 Henry Venables founded his timber business in Foregate Street, next to Bostock’s shoe manufactory. He made wooden packing cases for the export of shoes. The export trade to Australia was then at its height. He was born in Stafford in 1827 and had been working in the town since around January 1855 as a carpenter and builder.

The Foregate Street site was limited, and in order to introduce a new power driven saw mill he took out a lease from Lord Stafford on a new site in Doxey, on the outskirts of Stafford. Alongside the timber yard he built four cottages, and lived for the rest of his life at No.4 Rose Cottages. The cottages later became the company’s general offices. The business moved on to specialise in supplying English timber for wheelwrights, coachbuilders, railways, coal mining, and, later, the Manchester Ship Canal.

Following a fire in 1883, a new steam powered mill was built. Henry died in 1912 and his four sons, Henry, Thomas, James and George went into partnership. Thereafter, the company was slow to modernise, and it was not until it began to introduce new machinery, and to specialise in high quality dry oak in 1933 that its fortunes began to improve.

After the Second World War, traditional markets for wood declined rapidly, so a new approach was needed. Venables developed a reputation for expertise in specialist timber products and projects, using a wide range of world timbers. During the 1980s and 1990s the company’s expertise and products were part of several high profile restoration projects, including the restoration of York Minster after fire, the construction of the Lantern Lobby at Windsor Castle, and the building of the Globe Theatre at Southwark and the Swan Theatre in Stratford-upon-Avon.

In 1999 the business was bought out by Henry Venables Products Ltd., a new company with Tim Venables (great great grandson of the the founder Henry Venables) as managing director. Shortly afterwards, the business left its Doxey site and moved to a new home at Tollgate in Stafford.

No longer based in Stafford, the Venables business lives on in the form of Venables Brothers Ltd., specialists in European oak and timber products. Their base is now at Cheswardine in Shropshire.

This entry was posted in Associated industries, Bostock, Stafford. Bookmark the permalink.