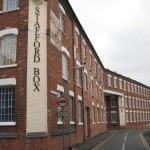 The Stafford Box Company still stands proud on the corner of Marston Road and Wogan Street. Although the company closed in 1997, the building has been converted into flats and apartments, and is an examplar for the successful conversion of an industrial building.

Originally built around 1862 as a shoe factory for Richard Podmore & Son, the buildings were taken over By C.H. Riley & Son in 1914 when they acquired Podmore’s. By March 1916 C.H. Riley had set up Stafford Box Co. Ltd. in the extension factory of Shepherds Bush Street, making cardboard boxes for the shoe trade. From about 1924 to 1946 the Shoe Finding Co. occupied the neighbouring buildings on Marston Road, making cardboard boxes and accessories for shoe manufacture. Stafford Box Co. Ltd. absorbed the Shoe Finding Co. in 1946. In the 1950s the company’s products included abrasives, wood boxes, card boxes, buttons, dyes and stains, eyelets, fabric linings, stiffeners, threads, toe puffs and waxes.

The Riley family maintained their controlling interest in Stafford Box Co. until 1977. The buildings remained after the company closed in 1997, but were then converted into apartments by PJS Properties between 2002 and 2004.