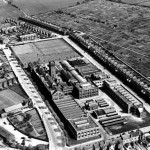 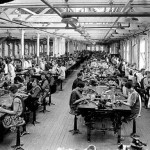 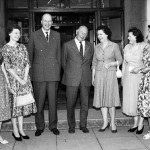 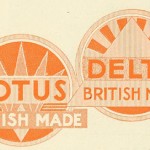 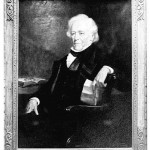 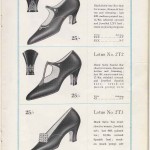 For most of its life, Lotus Ltd was the biggest shoe manufacturer in Stafford and Stone. The closure of the Stafford factory in late 1998 effectively ended the area’s long history of shoemaking.

The company’s origins lie with Thomas Bostock (1777-1865), who moved to Stafford from Derbyshire in 1814, and began to make boots and shoes in Gaolgate. By 1833 his son Edwin Bostock (1807-1883) was a partner, and the firm, now the largest in Stafford and employing about 200 men, women and children, moved into Greengate Street. By 1850 Edwin had taken over and a new factory was built in Foregate Street.

Edwin Bostock was instrumental in introducing the sewing machine in 1855; the first stage of mechanisation of the shoemaking process which ultimately lead to the factory system being introduced to Stafford and Stone. A mass protest by workers from all Stafford’s manufacturers took place in Market Square, forcing the owners to remove the machines. Similar unrest took place in Stone. However, machines were permanently re-introduced in July 1859, following the collapse of an all-out strike. By 1862 there were 300 to 400 sewing machines in Stafford factories.

Edwin’s brother Thomas (1816-1871) set up a factory in High Street, Stone by 1842, and when he died in 1871 Edwin took control of his factory. Later in the 19th century, a larger factory was built on Cross Street. In 1950 a modern factory was built facing Longton Road adjoining the old Cross Street factory. Meanwhile a third Bostock brother, Frederick (1812-1890), set up a factory in Northampton in 1835).

The firm became a limited liability company, Edwin Bostock & Co Ltd, in 1898. In 1901 the Foregate Street factory burnt down, and a new factory was built on Sandon Road and opened in 1903. This factory used the latest technology, equipment and layout with the advice of J.J. Heys, a Walsall man who had lived in Stafford before becoming the manager of an American shoe machinery company.

In 1919 Edwin Bostock & Co Ltd and Frederick Bostock Ltd of Northampton amalgamated to become Lotus Ltd, using a brand name they had been using for some time. Lotus Ltd thrived and grew during the 20th century, gaining a reputation for producing women’s shoes of the highest quality. Their goods were nationally marketed and benefited from economies in large-scale production.

Lotus made its own lasts, heels, boxes and packing cases. It operated a garage and a fleet of vehicles. For its employees, Lotus provided canteens, social and sporting facilities. A billiard hall opened in 1922 and a stage was built in Brook House for the Dramatic Society and Operatic Society. Lotus had its own Fire Brigade, and also its own Girl guides group for the daughters of company workers. The Lotus Association organised annual trips to Blackpool, Rhyl and Llandudno, and occasionally to Ireland and Belgium. Lotus Ltd had a reputation as a good employer and the factory as a good place to work.

Lotus Ltd acquired its first shops in 1926, exclusively selling Lotus and Delta brand shoes. The Lotus brand was named after the Lotus flower, a large white water lily of the Nile delta of legendary beauty and perfection.

After the Second World War, Lotus Ltd continued to thrive, and employed 2,117 people in Stafford in 1950.

After the closure of C.H. Riley & Son’s Footglove factory in 1957, Lotus Ltd became the only shoe manufacturer in Stafford and Stone. The Bostock family retained control of the company until 1970, when James Bostock (1902-1996) retired, and shortly afterwards it was taken over by Argo Caribbean. Debenhams acquired it in 1973, but shortly after in 1975 the Stone factory on Cross Street and Longton Road closed and the buildings were taken over by G.E.C.

Lotus Ltd was still employing 1,000 people in Stafford during he 1970s, but faced with increasingly competitive prices from overseas manufacturers, and the trend towards shoes becoming more disposable, the company was in steady decline. The export trade to the Soviet Union and eastern Europe and a series of contracts with Marks & Spencer helped the factory survive into the 1990s.

The Fii Group purchased the company in 1986. In 1996 the greater part of footwear manufacture was transferred from Stafford to Bridgend in South Wales in 1996, and the main Sandon Road Lotus factory was demolished in 1997. A small workforce continued in a newer building on the Sandon Road site until the end of 1998 when the remainder of the operation was transferred to Bridgend and the last 130 workers were made redundant.