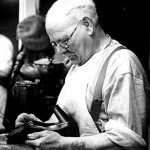 Invogue was the only shoe manufacturer apart from Lotus Ltd. to survive beyond the Second World War. By 1932 the company, which belonged to the Reinli family, had taken over Perry’s shoe factory which stood behind 59 High Street. Perry’s had employed around 50 people.

Invogue made very high quality shoes for London’s West End shops and had a workforce of around 40 people. The factory closed in about 1950 and was taken over by Metrobound. The building has since been demolished and houses built on the site.

This entry was posted in Boot & shoe making companies, Stone. Bookmark the permalink.

One Response to Invogue Shoes of Stone