Early trade societies in Stafford and Stone appear to have been friendly societies, which provided benefits for members and their families when they were sick or unemployed. There were a number of these organisations in the 1850s, including the Operative Shoemakers Society, the Old Trade Society of Stafford Shoemakers, and the United Society of Cordwainers.

The National Union of Boot and Shoe Operatives 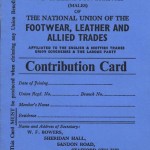 In 1874 the National Union of Boot and Shoe Rivetters and Finishers was formed as a breakaway union from the Amalgamated Society of Cordwainers, then seen as a craftsmen’s association rather than a workers’ organisation. Stafford’s boot and shoe workers played a major role in the formation of this new national union, and the conference to set it up took place in Stafford. Its members called themselves ‘The Sons of St. Crispin’, after the patron saint of shoemakers.

This entry was posted in Stafford, Stone, Strike, Working life. Bookmark the permalink.

One Response to Trade Unions