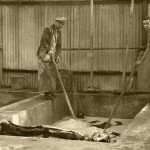 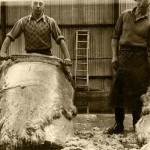 Tanners and curriers provided the leather shoemakers needed to make boots and shoes. Until the later 19th century most leather was produced by tanners in Stafford, Stone and other towns in Staffordshire. It may well be that cattle farming in Staffordshire, and the availability of cattle hides, was the key element in the development of the local shoe industry. By the 20th century, most leather was imported from Scandinavia, Russia and South America.

In Stafford, tanning took place on North Walls, and in Stone on Crown Street. Both were places just outside the town centres, where the unpleasant smells and sights could take place relatively discretely! Shoe manufacturers T.B. Elley had a tanyard in Stafford, as did Samuel Scott & Co. Both had closed by 1923. Stone had a number of tanneries in the 18th century, including those run by Mr Uretts and Mr Shelletts in 1756, and in the 19th century that by shoe manufacturers Charles Bromley & Son. Bromley & Son survived as leather factors on Lichfield Street right up until 1968.

Tanning processes
There are three main methods of tanning leather:


Currying
The currier adds oils and grease (dubbin), and stretches the leather to make it softer. He may also pare it down to the required thickness, and smooth the ‘grain’ side to improve the appearance. The leather would then be ready for use by the shoemaker.

This entry was posted in Associated industries, Stafford, Stone. Bookmark the permalink.

3 Responses to Tanners and Curriers