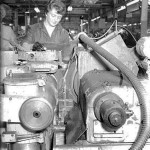 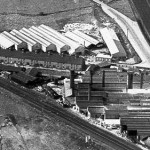 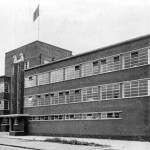 The origins of Universal go back to Rooper & Harris Ltd’s Castle Works factory, founded in 1893. They produced a number of abrasive products, including some for finishing processes in the shoe industry, and in 1913 a new works was opened on Doxey Road to make vitrified grinding wheels.

In 1914 they combined with a number of other similar businesses to become the Universal Grinding Wheel Company of Stafford. The factory was extended during the First World War, and in 1921 the Castle Street works was closed.

The company continued to expend during the inter-war period and a small housing estate was built for workers at Greensome Lane, Doxey in 1935. By the late 1950s the Doxey factory was the largest of its kind in Europe, covering a 44 acre site. As well as laboratories and a variety of specialised production units, the company had excellent sporting facilities, including a cricket field, tennis courts, bowling green and social club.

By the 1970s they had become Europe’s largest manufacturers of grinding wheels and employed 1,600 people in Stafford in May 1977. Universal’s parent company, Unicorn Industries PLC was acquired by Fonseco Minsep PLC in 1980 which in turn was acquired by Burmah Castrol PLC in 1990.

Venture capitalists Apax Partners bought the abrasives division in 1992 and sold it to Unitec Ceramics. The new group was called Unicorn International PLC with headquarters at Doxey. Finally, the Unicorn business was acquired by the French company, Saint Gobain, the world’s largest abrasives business.